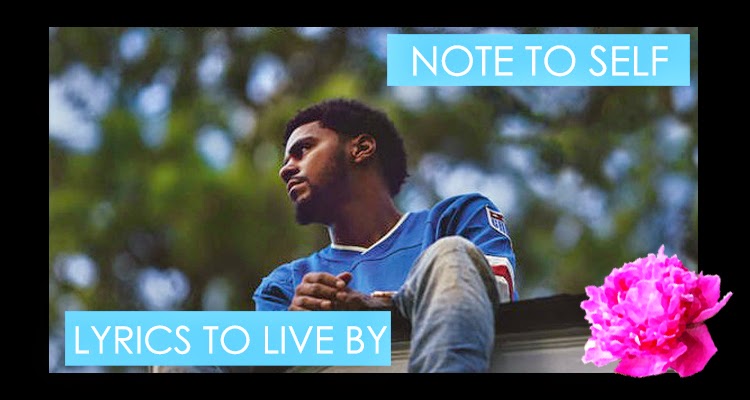 One night, as I took a bath and listened to Spotify, J. Cole’s Note to Self from his most recent album, 2014 Forest Hills Drive began to play. The song really moved me with its euphoric melody and simplistic lyrics. It moved me so much, that I burned it first on the CD I made for my car (Shout out to cars with no MP3 plugs).

I’ve been constantly listening to Note to Self on my many car rides to and from work. And every time, the lyrics hit me harder; particularly, the lines “I don’t ‘mind cause you don’t matter, I don’t mind ’cause I don’t matter.” They’re profound, and I believe that just as people live by Dr. Seuss’ quote “Be who you are and say what you feel, because those who mind don’t matter and those who matter don’t mind,” these lyrics can also serve as the framework for the standards you expect in life. In other words, I’m writing about how the lyrics of a J. Cole song can help you live your life.
“I don’t mind ’cause you don’t matter”
These lyrics are easy enough to understand. They’re saying, “I don’t care what you do or say because you are not important enough to bother me.” A person who first comes to mind when I hear these lyrics is Rihanna, the pop star diva. She’s widely known not only for her work in the studio, but her IDGAF attitude. In 2012, after being spotted smoking several blunts, MTV tweeted about their discomfort with the marijuana photos. Her response?

She’s also proven through her social media platforms that she doesn’t care about anyone’s thoughts on her outfits, relationships, or any other aspect of her life. At one point, she had beef with TLC’s T-Boz and Chilli after attending the CFDA Fashion Awards in a revealing crystal gown. Although, it is important to care about the impression you give online or in person (cough cough PCB Spring Break photos should be hidden), it is just as important to discern the opinions of others that you should and should not care about. Every successful person has a hater, a person who doesn’t agree with their opinion, a person who condemns their lifestyle, etc. Successful people like Beyonce, Obama, and Buddha all have people who disagree or resent them in some way. There are even people who hate the movie “Up” for crying out loud! In life you just can’t please everyone. That is why it is up to you decide which opinions to care about, and which ones to just leave alone. Attempting to please everyone is just not possible, and you’d drive yourself crazy with worry if you tried.
“I don’t mind ’cause I don’t matter”
Now, these lyrics are a bit more tricky to comprehend because so many people fail to acknowledge that when you allow something to bother you without addressing it, you are subliminally admitting that your feelings do not matter. When I hear these lyrics, I think of myself and friends who have been in unhealthy relationships. If you allow your significant other to berate you, and don’t explain to them that you are bothered by such, you are diminishing your worth. If you still hang out with a friend who you know talks badly about you to others, you are diminishing your worth. The list goes on. If you let things happen without addressing how they make you feel, or if you just sweep them under the rug, you are showing that you do not hold yourself to a standard in which you expect respect. If you do not demand respect from the people around you, they will treat you like a dirty door mat. In other words, you are telling people that you do not matter. And that is probably the worst thing to do because every being on this Earth matters (aside from rapists, terrorists, and others who cause harm). As a human being with only one life to live, you must assert yourself. If someone hurts you or offends you, you must tell them, “No, I will not stand for that.” And if they cannot meet the standard of respect that you expect from them, cut them off. Once you do so, they will fall into the “I don’t mind ’cause you don’t matter” category.
I love the work that J. Cole has produced. I am especially a fan of the song Apparently from the album, as well. However, Note to Self has been speaking to me. It’s sort of like a lyrical sermon that I receive every time I push the rewind button. I’m sure everyone has listened to his album at least ten times, but I urge people to listen to the the lyrics and apply them to the struggles you may be currently facing. I found a solution to my problems through these lyrics, and I’m sure you can too.