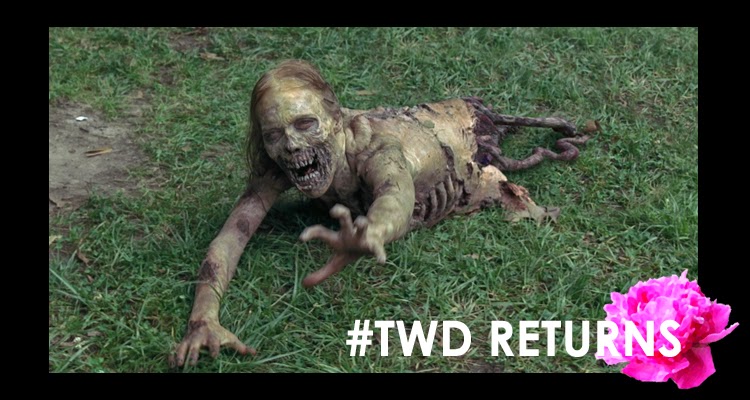 My anticipation and eagerness for the final half of The Walking Dead’s fifth season is so high that I have been having post-apocalyptic zombie dreams. I’ve actually had 4 over the past month.

In my first dream, I was in a store that looked similar to a BJ’s Wholesale or a Sam’s Club. The rest of the residents of my town were running around like maniacs grabbing as much food as they could. I could hear the faint moans of zombies outside as I walked down the aisles.
In my second dream, I was at BJ’s again. But this time, I was fighting with some teenage boys over the bicycles on the top shelf of one of the giant storage racks. You know how in WalMart they have the cool bicycles sitting high up on those metal container racks? Yea. The teenagers and I were fighting to the death to get these bicycles, climbing the poles like uncivilized scavengers. It was like a scene straight out of a Hungers Games/ Kill Bill combo. Then, I had a dream that I was fighting a zombie, but they grazed my shoulder, thus infecting me with the disease. I spent the last hours of my life “living my life to the fullest”… however possible that is in a world where everyone I’ve ever known is dead and I still have zombies chasing my bloody body. I just remember limping around town, crying and telling every survivor that I loved them as the disease slowly crept in.

Last week, I had a dream that I was in my house. It was a cool Spring night and all of the lights were off. Me, my Mom, Dad, and brother were all hiding in the basement with blankets. The windows were covered and the house was surrounded with so many zombies that I could barely hear my thoughts with all of the moaning going on. I was filled with horror and my sweat was cold (in my dream). I was peeking out from one of the blanket covered windows to see if the zombies noticed our existence. Meanwhile, my little brother was playing video games on the PS3 and refused to turn it off. The TV screen was so bright that I knew at any moment, the zombies would start banging on the windows. The family was whisper-yelling at him to turn the TV off.

Being inquisitive, I looked up my dreams at dreammoods.com and this is what it said:

I’m going to take a wild guess and assume from the explanations stated above that I am going through an early life crisis that was caused from post-college graduation anxiety. My fears with what to do next with my future, along with a relatively recent breakup have caused me to have these dreams. The video games explanation didn’t really apply since I wasn’t playing or in the video game, but watching someone else play the video game. It’s funny how much “inner turmoil” was mentioned in the dream explanations. I can agree with having some turmoil but I wouldn’t say I’m completely freaking out about it. These dream explanations are very in depth and at times…a stretch. I could just be having zombie dreams as a result of TWD withdrawals. Or maybe I’m just crazy? Who cares. I’m just excited for my favorite show to be back as of tomorrow!