One afternoon, I found myself very hungry, but too lazy to want to move from my D.C. work desk and go get some lunch. Luckily, I remembered that my coworker had ordered from UberEATS a few days prior. I was craving Thai food but the nearest restaurant was a 20-minute walk away. So, with my stomach on “E”, I quickly downloaded the app and made my first UberEATS purchase.

For those of you who don’t know, UberEATS is a branch of the UBER company, widely known for its on-demand driving service. The company launched EATS a couple months ago in D.C. and has been trickling into other major cities as well. At first, I was hesitant about the service. “Why should I pay someone to deliver my food? Isn’t that what delivery guys are for? Isn’t that market already filled?” Apparently not.

For people who are in a similar situation as me (hungry but not ready to deal with winding in between people on city sidewalks and then standing in overgrown lines), the app actually turned out to be of value. I was able to order the Pad Sa Ew I craved, just with a tap of a few buttons. From my experience, let me share with you the pros and cons of UberEATS:

No need for walking or driving.

Besides possibly taking an elevator down stairs, and walking to the sidewalk where the delivery person is parked, you don’t have to move a muscle. This is great especially for working professionals who may have a busy work day and forgot to bring a lunch.

The delivery fee is only $5.

Currently, you are only charged $5 for an order. That’s right. $5 no matter what you order. My Thai food from Bua Thai totaled to $13- fee included. And it cost the same amount when I reordered the same dish a few days later.

Eat from restaurants who don’t deliver.

UberEATS has partnered with select restaurants to provide a service. This includes restaurants who may not provide the delivery services otherwise. It’s nice to be able to eat a food dish you may have had to drive to and sit down for. 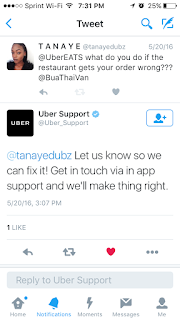 I ordered the same Pad Sa Ew dish a few days later, and the restaurant got it completely wrong. You can read about it under ‘Cons’. I wasn’t sure how to complain about it, so I resorted to Twitter, like I usually do with any other company. Within minutes, UberEATS responded to my Tweet, and instructed me on how to make a complaint through the app. Their “Issues” tab is easy to use. Within a 15 minute span of my initial Tweet, I was given an 100% refund (but no corrected meal, unfortunately).

Had it not been for the UberEATS app, I probably wouldn’t have ever ordered or eat food from Bua Thai. So, being a person who loves to try new foods from new restaurants, I was excited at the opportunity to become broaden my horizons.

Selection of restaurants is limited.

When searching for restaurants who could satisfy my Pad Sa Ew craving using UberEATS’ search bar, only 2 restaurants were  provided. The same 2 restaurants appeared when I searched for Thai options at home as well (outside the city). D.C. has a plethora of Thai restaurants, mind you. So, it’s a bummer that the variety of restaurant options are limited. This actually ended up being true when the restaurant got my order wrong. Touch on that in a few. Obviously, drivers face traffic. Especially in D.C. But much like the Uber app, the UberEATS app allows you to see where your driver is, the route they’re taking, and how far they are from you. When you choose your restaurant, you are given an approximate time of how long it would take for the food to arrive at your door step. But, this does not include traffic. Nor does it include the time in between you placing your order and the restaurant acknowledging it. So, when you order your food at 2 p.m., don’t expect it to arrive at 2:30 p.m. as the map might show. For me, it took 45 minutes for my food to come. And it doesn’t help that my delivery person didn’t know how to read her own GPS and somehow ended up on the opposite side of town (the second time I ordered). Sigh.

I wonder how long it would have taken for my food to arrive if I ordered from the restaurant that was 40-51 minutes away. Probably an hour and a half or longer. Yikes!

You’re stuck with it.

Like I mentioned before, the second time I ordered my Pad Sa Ew from Bua Thai, they got it wrong. I ordered Mild Chicken Pad Sa Ew. They somehow managed to give me a dry noodle with spice flakes all over it. Being hungry, I was livid. Even more so because I can’t handle spicy food. Yes, I got my money back. But, at the end of the day, I was still hungry… and now disappointed. With my two options now being narrowed down to one due to Bua Thai’s mistake, and that second option being an hour away, I don’t think I’ll be ordering Thai food from UberEATS again.

No surprise here. Using a coupon through the UberEATS app is just as difficult as using a coupon through regular Uber. To sum it up, if it’s not your first time using the app, you’re S.O.L. The first time I order from the app, I was so hungry that I forgot that I could get a discount for it being my first time! When I ordered the second time around, not a single coupon I found (there are many) was “applicable.” I could’ve eaten a $13 meal for just $3. I missed out. But, you don’t have to! Use my discount code below for $20 off!

Hungry? If you want $20 off your first order on #UberEATS, use my code:
eats-9zpum

This post was not endorsed by Uber, UberEATS, or Bua Thai in any way.